The Transportation Disruption and Disaster Statistics (TDADS) dashboard was created to compile and archive operational-related information into a data system that provides standardization of transportation system disruption, resilience and disaster statistics nationally. This tool considerably upgrades and enhances the Sources of Congestion – National Summary pie chart developed in 2004, with features and functionality that allows for more comprehensive congestion causes categories and robust analytics.

Shown below is the landing page after you log into the system.

At the top of the Congestion Causes dashboard is the control bar where you’ll quickly and easily assess sources of disruption to traffic at a national, state and county level for the National Highway System (NHS).

Use the two drop downs in Time Aggregation to select the year, month or range of months to visualize variations in the disruption statistics by time period. Both the pie charts and Probe Data Analytic statistics (User Delay Cost / Vehicle Hours of Delay) will update, reflecting the selected time periods.

Use the two chart buttons to toggle back and forth between chart styles – pie chart or horizontal bar chart – to display disruption statistics that are most amenable to your particular situation. 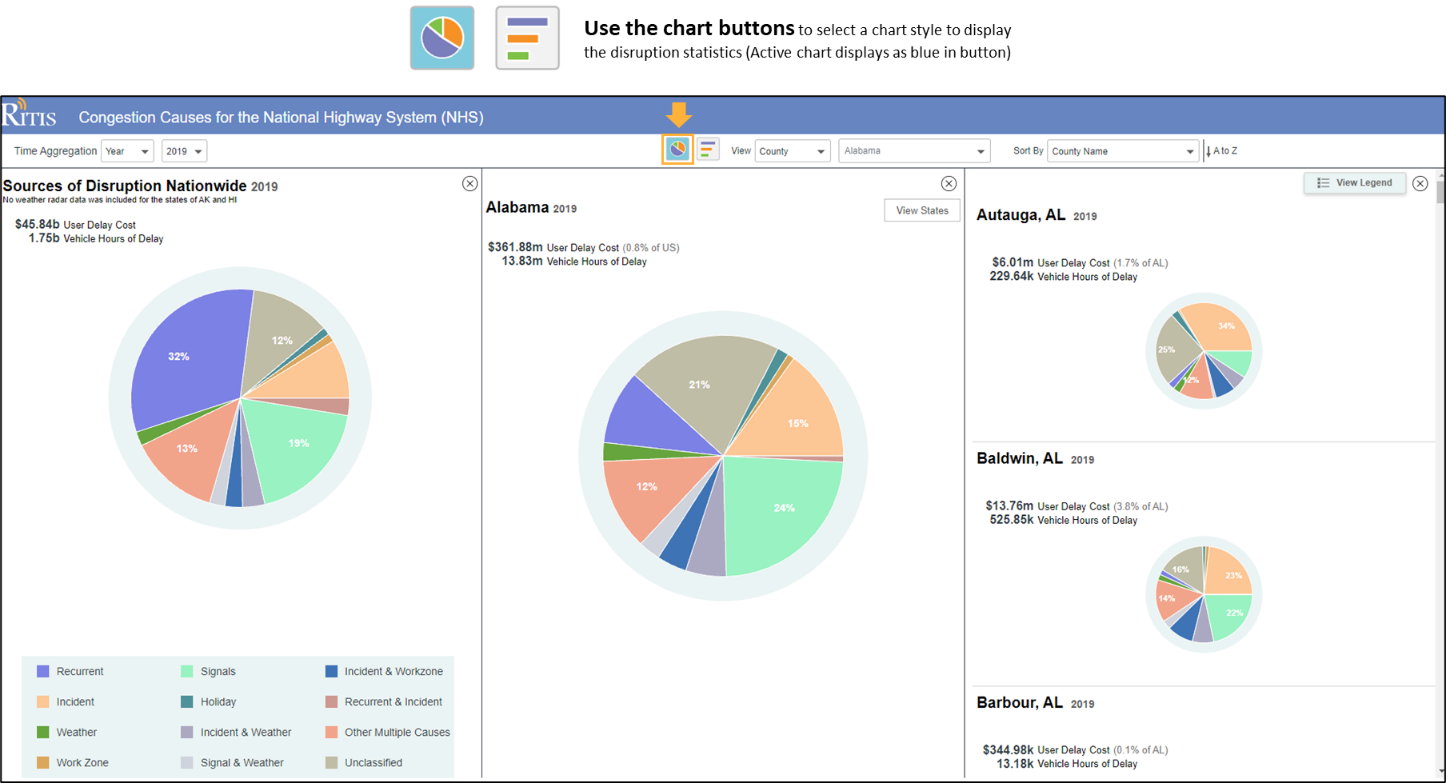 Use these controls to view a variety of geographic areas – national, statewide or county-wide – alone or in combination. You can also use the Sort By dropdown to sort county information by county name (ascending or descending) or by any of the sources of disruption from highest to lowest, or lowest to highest occurrence.

Selecting a Disruption on a Chart


Further details on the causes of congestion methodology are provided in the data flow diagram and logic diagram below.

As shown in the above figures, the basis of the causes of congestion methodology begins with identifying when and where congestion occurs. As described in detail in the bottleneck ranking tool help page, congestion is defined as an observed speed that is 60% or less of the free-flow speed that is sustained for at least five minutes. Once these conditions were met, a bottleneck is activated, and the quantification step is initiated. Delay is estimated each minute based on the speed drop and queue length associated with each bottleneck head location until the head location returned to at least 60% of the free-flow speed for ten minutes. The total delay for each bottleneck is computed by multiplying the delay by the impacted traffic volume and then aggregating the one-minute delays for the entire period that the bottleneck is active. Delay is estimated as both vehicle hours of delay and user delay costs, assuming a constant vehicle classification of 90% passenger vehicles and 10% commercial vehicles. The value of time for passenger and commercial vehicles is assumed to be $17.91 and $100.49 per hour, respectively.

The last step is to assign the total delay for each bottleneck to a causation category. As shown in the data flow diagram and logic diagram, this process begins by looking at the temporal congestion pattern. If the delay pattern is similar to the historical pattern for the time of day and day of week of the target bottleneck, the bottleneck was categorized as a recurrent bottleneck. However, if the delay pattern was different, additional causation causes were considered. In a similar fashion, if the congestion was deemed non-recurrent, alternative causes were assessed including multiple causes as well as an unclassified category for instances when a cause could not be determined. Each bottleneck is assigned to a causation category and the results are then aggregated by month and county. The counties were aggregated to build the state results, and the states were aggregated to build the national results.

Assigning Delay to Bottlenecks That Straddle Temporal or Spatial Boundaries


It was possible for bottlenecks to straddle counties and/or months. In such situations, the total delay for each bottleneck was assigned to the bottleneck head location and start time. To illustrate this concept, consider the real-world bottleneck on the outer loop of I-495 (Capital Beltway) at the interchange of Georgia Avenue in Maryland (blue circle). The head of this bottleneck is in Montgomery County, Maryland (green polygon) but the associate queue (blue polygon) spills into Prince George’s County, Maryland (purple polygon). The total delay from this bottleneck was assigned to the head location and was therefore included in the Montgomery County results. Similar logic was employed when a bottleneck straddled multiple months. 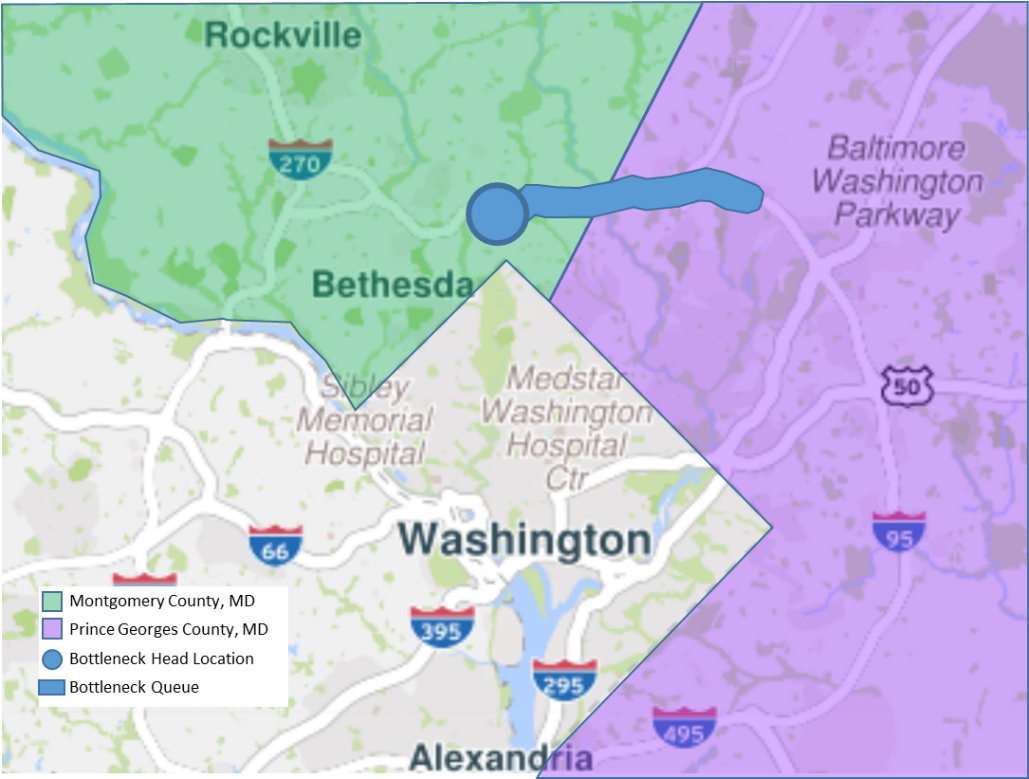 Spatial Designation of Bottleneck Impacts (example on I-495 in Maryland) 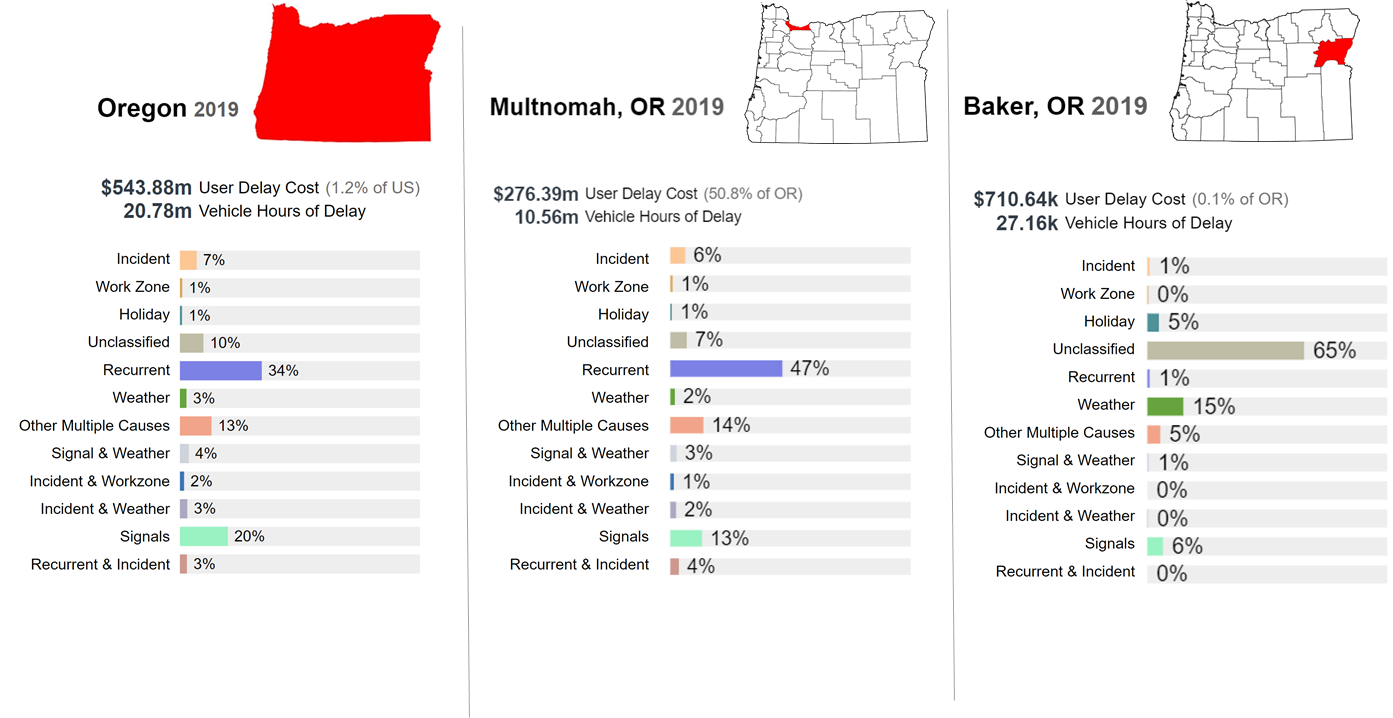